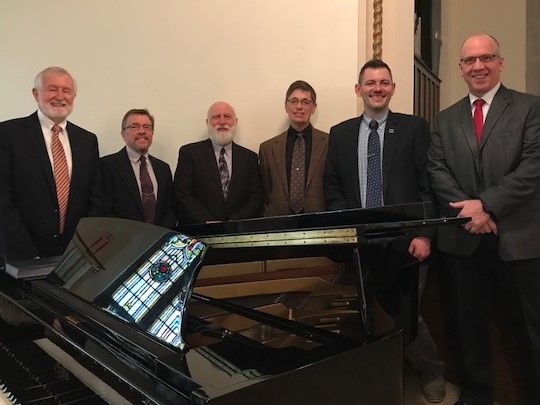 The choir program runs from the second week in September through the second week of June. In addition, the Chancel Choir sings informally on the last Sunday of each month during the summer, a good opportunity for trying it out!

Added music is provided by instrumentalists, soloists and small groups.

Bryan is Vice President of Voces Solis Pittsburgh's premier vocal chamber ensemble. He has been a featured bass soloist with Voces Solis, and serves as one of the co-conductors of the group.

Sable has served as Music Director at Christ United Methodist Church, Wheeling, and as Music Assistant at St. Paul’s Episcopal Church, Mt. Lebanon, where he conducted the Bell Choir, Youth Praise Band, and the Canterbury Choir. Bryan was a finalist in the 2014 University of Michigan Organ Improvisation competition, and is so happy to be serving Coraopolis United Methodist Church!

Worship , choral responses and hymns are also a very important and integral part of the service.

At both Christmas and Easter, the Chancel Choir presents a cantata, often incorporating percussion and other instruments.

Throughout the year, Coraopolis United Methodist Church hosts many other musical events. Some evening programs form our "light music nights," celebrating the lighter styles of both sacred and secular music.

During Lent, the church hosts a recital series which features both local musicians and national/international performers.

The choirs regularly participate in community activities, often at local senior citizen residences and . In 2005, the Chancel Choir sang in Pittsburgh's and more recently collaborated with both the North Pittsburgh Philharmonic and Pittsburgh Pops Youth Orchestra.

Thank you so much for your interest in Music Ministry at CUMC. I look forward to speaking with you soon!

Please join us each Wednesday through Lent for our Lenten Recital Series! A free-will offering will be collected. Join us for coffee and pastries following the performance!

From time-to-time, the Music Department sponsors a Travelogue featuring stories and photos of someone's vacation. A Pot luck dinner begins at 6 PM, with the program beginning around 6:45. Free-will offering to benefit the church music program is collected.

If you haven't yet been to a Travelogue, these are a GREAT way to become acquainted with places in the world that you may ne…